In its latest meeting, the Monetary Policy Committee (MPC) announced an increase in cash reserve ratio (CRR) from 22.5% to 27.5%, the first raise since March 2016. Of all the considerations given for the surprise adjustment, the need to combat liquidity-driven inflation was notable. The impact of the CRR increase is likely to be diametrically opposed to that of the loan-to-deposit ratio (LDR) measure already at play, in our view. Specifically, while the LDR measure is configured to induce bank lending, the CRR increase could curtail banks’ ability to achieve that objective with more funds likely to be sterilized

We see the following as broad implications of the policy move:

• Banks’ liquidity could tighten, leading to a scramble for funds with negative consequence for funding cost

• Downside risks to banks’ earnings, but mild implications for valuations.

We will try to execute purchase/sales order mandates on FGN treasury bonds & FGN savings bonds at near the last e-o-wk (end of week) market rates as shown below:

Standard fixed savings acct opening starts at min. N5,000 where your CSCS acct acts as your e-custodian & e-savings account within the CBN S4 platform. Under the savings product –  Upfront Interest Savings Scheme. which starts at min. savings order of N100,000.00 – only FGN bonds with coupon >7% p.a qualify to be allocated to bond clients.

ARMF Bond Portfolio has opened a new sub-product called ”collaterized security margin trading” which is accessible only to bond investors under the Upfront Interest Savings Scheme starting from a min. fixed savings of N1MLN @ margin loan rate of 0.0822% per day (pro rata).

Thus, savers can now leverage on their bonds (fixed savings) under the upfront interest savings scheme to obtain fresh cash to invest on the NGSE equity and/or derivative market(s). A N1MLN fixed savings will gain access to an equivalent N1MLN margin loan => N2MLN margin account => leverage ratio (asset/equity) of 200% (2:1).

ARMF Bond portfolio re-opens its sourcing for funds upto N500MLN to be used for the following:

Caution – selling bonds on the secondary bond market before maturity, can either incur capital loss or capital gain !!!!

Should you require further information on how to get the best (and/or highest) annual interest on Your savings, please contact directly:

Where Is Naija Stock Market Index Going In February-2020?…. 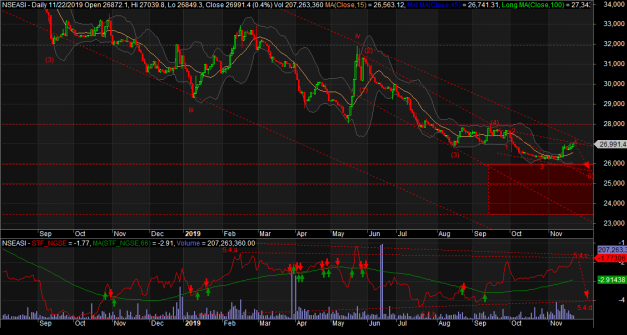 The Traders Navigator indicator is also confirming the expected fall as it spots a bearish divergence within a long-term contracting triangle (since Oct-2018) where the next wave (5.4.d) should be bearish thus the probability of a bearish market in the first 2 weeks of Dec-2019 is high.

MACD is also confirming the expected bearish trend as it recently formed a bearish hook thus the probability of a bearish market in Jan-2020 is very high.

The Traders Navigator indicator is also confirming the extreme bullish trend as shown in the above diagram…..thus we expect the bullish trend to cover the 1Q2020 till dividend payment period.

The index is now in a sideways movement with an expectant rally in the 2-H-Feb-2020. Feb-2020 remains bullish within a calm trading month. If MACDH falls below zero level, prepare to take initial profits !!!

We strongly advise investors to watch attentively price movements in Brent Crude Oil Market as this external factor can be a game changer in the 2020 expectations in the Nigerian financial markets.

In ancient mythology and folklore, silver is seen to have magical powers, used to conquer and combat monsters and used to ultimately overcome challenges faced by Knights and heroes of old.

In Nigeria, one of the monsters that have needed to be faced head-on is a regime of high interest rates and its impending effects on the growth of the country. Most recently, the Central Bank of Nigeria (CBN), led by Governor Godwin Emefiele, decided to take on the challenge of addressing this deterrent to domestic economic growth in Nigeria.

Historically in Nigeria, interest rates have always been high, and this can be directly attributed to the monetary system in vogue since 2009, which sought to use FGN bonds/T-bills and OMO bills as a means of attracting US$ into Nigeria to help stabilize the Naira.

Following this long unnecessary spell of extremely high interest rates in Nigeria from 2009 to 2019, it is gratifying to see that once again, it is possible to experience the rebirth of a sustainable credit economy in Nigeria; one that can support ordinary citizens as well as infrastructure growth.

Yes, many commercial bankers, pension fund managers, asset managers, and traditional buy-side investors do not like these lower rates. Some use old archaic economic theories that question how inflation (at 11%) can be higher than the treasury risk-free rate (at 3%). Even when you look at inflation against yields on fixed income securities, it would be inflationary expectations that an economist will analyze and not the spot inflation per se.

If I were to purchase a 10year bond, with a coupon rate of 10% and spot inflation is 11% today, you could argue that you are getting a negative return today. However, this would only be for the first year as inflation the next year could be 9% or could even have dropped to 7% in year 5 and so on. Therefore, over the duration of the bond, my coupon rate begins to exceed future spot inflation rates as described above and therefore I’m in the money (bond price in premium).

If, however, I did not buy that bond and inflation falls as described above, the new bonds will have increasingly lower coupons and my profit as an investor becomes much less. Who also says that the short-term risk-free rate (T-Bills) must be above inflation? Where an investor wants above inflation returns, then such investor takes the appropriate risk/reward opportunities. That is what all other institutional investors, worldwide do.

Why the clamour for low interest rates?

The answer is simple. No economy can expect sustainable real growth when long term rates are above single digit. In order to attack inflation in Nigeria, we need to combat the high cost of the factors of production i.e. power, infrastructure (hard & soft), logistics, transportation, and a host of others. Long-term funding therefore becomes critical, most importantly the cost of financing at the risk-free rates that make our commercial banks, pension funds, etc. happy. Financing these critical components of economic development for the country become utterly impossible, leaving us in the rot we have become accustomed to. However, with Emefiele’s silver bullet, projects that will reduce the cost of production in Nigeria and enable us morph into a country that can produce competitively rather than continuously import, begins to actualize.

Why do we call it a silver bullet?

The lower interest rates you see today is a matter of basic economic supply & demand, induced by removing domestic investors from CBN’s Open Market Operations (OMO). Henceforth, domestic investors have been directed by the CBN to buy domestic securities issued by the Federal Republic of Nigeria, namely Treasury Bills and FGN Bonds. The result is that the demand for treasury bills and FGN bonds now far exceeds its supply and as such the yields have been adjusted to their normal economic equilibrium, dictated by investor appetite. OMO securities are now the preserve of a bilateral financing agreement between the CBN and foreign portfolio investors.

In other words, Foreign Portfolio Investors (FPIs) will be willing to buy Nigerian OMO bills at a negotiated yield that does not distort the Nigerian domestic yield curve, fostering a credit market in the country and allowing Nigeria fund its infrastructure with long term economically viable Naira. I recently read an article from an international rating agency criticizing this move by the CBN, sighting illiquidity in the OMO securities due to a much smaller investor base. If a window was opened to foreign investors to sell to the CBN whenever necessary, then this totally makes the bills liquid and defeats that theory from the rating agency.

With regards to the fear of a Naira devaluation, again this is an inaccurate conclusion. To the extent that the negotiable rates between the CBN and FPIs remain attractive, the probability of a run on the Naira remains mute. This coupled with the Import & Export FX window and CBN’s timely interventions, we can look forward to having a relatively stable currency and low economically viable interest rates that will help grow the economy into a stronger future.

This answer is a resounding yes. Nigerians lets support this crucial initiative from the CBN for a brighter tomorrow and let’s help ourselves breakout from our history of round tripping banking. Congratulations to Governor Godwin Emefiele and his team at the CBN for a job well done.

The global picture to the fore:
We welcome the pause in easing by the Federal Reserve: more cuts would have signaled that global headwinds required a response and/or that the world’s largest economy was in difficulties. Neither would help Nigeria or EMs generally. We also welcome the resilience of the oil price, underpinned as ever by geopolitics. Any further rapprochement between the US and China over their trade dispute would be supportive of demand.

Another year of unexciting growth ahead:
We see growth inching forward in the direction of 3.0%, based upon a small fiscal stimulus, a modest rise in oil output, selective private investment and, finally, an increase in credit extension. The rebuilding of household wallets is slow work-in-progress despite the settlement of some salary and other arrears. At some point, the introduction of the approved new minimum wage will also provide a boost. Some substantive reforms by the FGN alongside its success with the 2020 budget would help.

The first budget test passed, more to follow:
Having pushed the budget through with great speed, the challenge for the FGN is to boost revenue collection and capital expenditure.

The fx regime to survive some turbulence:
The leading macro story is the solidity of the fx regime in the face of reserves depletion and the exit of some foreign portfolio investors (FPIs). We think that the authorities will be able to hold the line although their task would be easier if the FGN was to return to the Eurobond market.

Correction in debt market, potential 19% return for equities:
We doubt that the surge in FGN naira debt markets is sustainable and see a little retracement this year of up to 100bps for mid-curve bonds. Although fundamentals are still challenged, asset rotation by domestic institutions is helping the equities market. We forecast a year-end close of 35,000 for the All Share Index (ASI), +30% from end-Dec 2019, +19% from current levels.